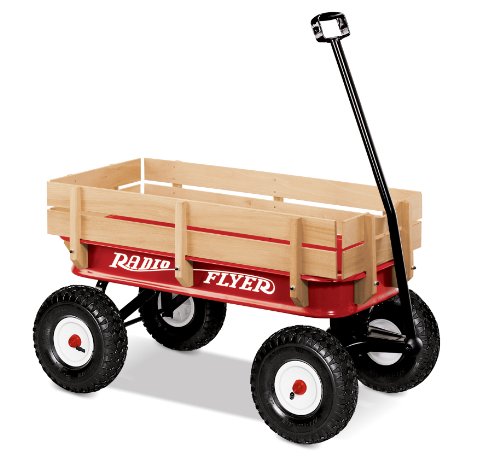 The red wagon is one of those toys that have captured the imagination of thousands of young children for many decades. Most adults look back fondly to the first ‘set of wheels’ they ever had and in many cases, it’s been this particular toy.

For many, this affection for these toys has resulted in a life-long love of anything with wheels. That’s one of the reasons parents are happy to buy red wagons for their own kids. It allows young children to have the same memorable experiences their parents had when they were young.

Red wagons are one of the most basic toys available today. Over the years, their design has barely changed. However, simple ideas are often the most popular.

That’s definitely true for these wagons. They give your child the opportunity to develop their imagination as they travel from place to place. They’re also perfect toys for more than one child to play with.

This helps kids develop many social skills too. It’s also the perfect toy for traveling games and for transporting your child’s favorite toys such as dolls, blocks, action figures and other important cargo. Smaller versions of the toy have also been designed to carry toys only.

These wagons have come a long way in recent years as toy manufacturers realize how popular they are. Various red wagon models have been developed to suit every child’s needs. There is now a collection of red wagon models with variations of the original model for kids who want more than just the basic wagon.

As more and more children play with these toys, the number of models has also increased. Additional features are now available in the latest models. Umbrellas, canopies and other features have been added to newer models, making them popular with even more kids.

The red wagon design has stood the test of time. Most of them still have the same basic design and this has been one of the secrets of its success because they are instantly recognizable.

The body of these toys is usually made from wood, steel or plastic and is used to transport toys or for kids to sit in. They have four plastic or rubber wheels and a T-shaped handle at the front. The wagon is steered and moved using this handle.

Some newer models fold up so they take up less space when they’re not being used and can be easily transported. Storage compartments and cup holders have also been added to many newer wagons.

So, why are these toys so popular? There are not many toys that both boys and girls like to play with, but the red wagon is one such toy. Since the invention of the wheel, the human race has been fascinated by all types of vehicles, no matter how basic they are.

The red wagon is often the first moving toy kids play with. For a young child, having their own vehicle to travel in and transport toys is exciting. It’s often the beginning of an individuals’ interest in anything with wheels.

No doubt, there are probably some top drivers out there who would have started their driving careers in one of these toys.

The Radio Flyer wagon is by far the most icon of red wagons. It’s basically the symbol of an entire generation of kids toys! These little red wagons, while there are other brands (like Step 2, Fisher Price and others), are STILL the #1 brand in the world.

Red wagons are usually suitable for young boys and girls aged 18 months and older. The range of red wagons has been expanded to suit a variety of tastes and requirements.

Wagons are now available for single use or can hold two kids, depending on what you’re looking for. Prices vary, depending on the model your child wants.

There are so many iconic brands of toy wagon including Big Red Wagon, Little Tikes Wagon, Fisher Price, Step2 and even wooden wagons for kids, even though most are made from metal.

And not to forget the recent addition of beach wagons for sand that many kids and parents enjoy during the summer time on the beach.

Safety is a priority when it comes to ride-on toys. In the past, these types of toys were designed in a more primitive ways. This has all changed as safety becomes more important. The main safety features include seatbelts and a more sturdy design. The tires on these wagons have also improved to give a safer, smoother and more comfortable ride.

Many toys come and go. Some are popular for a few years and then fade away. However, red wagons are different. They have endured the test of time.

Toy wagons have been around since ancient times, and the red wagon carries on our love of these toys even after 100 years from the first wagon it was built in 1917. As their popularity continues to grow, there’s no reason why these ride on toys will not be just as popular for many generations to come.

Many adults think back the time they had their first red wagon and normally introduce their kids to this simple, yet entertaining toy knowing they will enjoy this toy just as much as their parent once did.

New toys come and go but toy wagons like the little red wagon continue to be extremely popular with young kids. For many decades, red wagons have been one of the first toys children play with that has wheels. 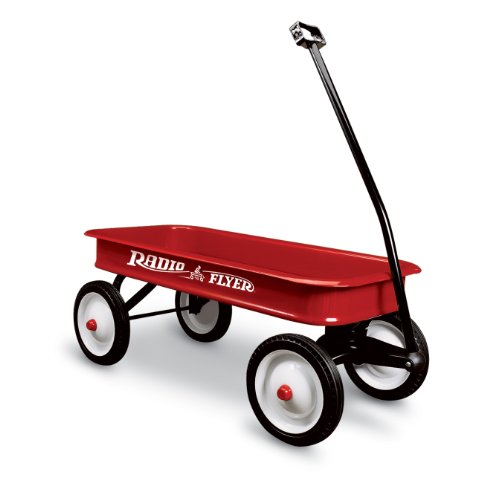 This miniature version of the iconic red wagon is designed to hold and transport your child’s small toys including dolls, books, building blocks and plush toys. Kids love to copy the actions of adults. This has led to many young kids replicating some of the jobs older people do such as bringing in firewood and other objects.

The little red wagon has all the features of larger models except that it can’t be used as a ride-on because of its small size. Despite this, most young children think this wagon is an exciting toy because it allows them to use their creative skills and imagination as they transport their favorite toys from one place to another.

The little red wagon is the perfect toy for kids aged 18 months and older who want to have the freedom to transport their toys and other objects from one place to another. Each little red wagon is sturdy with a steel body and a set of molded wheels. Its T-shaped handle makes it easy for your child to pull and steer this toy.

The Radio Flyer Little Red Wagon is probably the most iconic of all little red wagons.

Toy wagons have existed for centuries. Their simple design makes them a popular toy for young kids. The little red wagon is one of the latest to become a favorite with younger kids.

The History of the Radio Flyer Red Wagon

1917 – Brilliant Venetian craftsman Antonio Pasin came to America with big dreams. In 1917 he rented a workshop and began making wagons by night, as he worked in the day to support his new business. Black and White Statue of Liberty

1927 – Creativity and steel, metal stamping and mass production techniques of the automobile industry. Earn him the name “little Ford.”

1930 – He named his first steel wagon Radio Flyer, after his fascination with the invention of the radio by fellow Italian Guglielmo Marconi. He added flyer which reflected his wonderment of flight.

1930 – Coaster boy exhibit at the world’s fair, was a major promotional success!

“May the imagination of children really take flight” – Antonio Pasin

WagonsforKids.net is a participant in the Amazon Services LLC Associates Program, an affiliate advertising program designed to provide a means for sites to earn advertising fees by advertising and linking to Amazon.com, Amazon.co.uk or Amazon.ca.

As an Amazon Associate I earn from qualifying purchases.